WASHINGTON, Dec. 12, 2022 /PRNewswire/ — Entrepreneur and philanthropist Brock Pierce, Chairman of Commission 52, was honored to present the keynote speech at a celebration for the passage of the Iran Hostages Gold Medal Act (H.R 1179), on Tuesday, December 6, 2022, at the Capitol Center in Washington D.C. The Congressional Gold Medal is the nation’s highest civilian award bestowed by acts of the Congress. 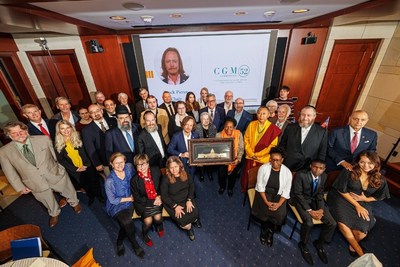 Attending the event were survivors and family members of the 52 former American hostages from the 1979-1981 Iran Hostage Crisis. For 444 days, the hostages were subjected to physical and psychological torture. Despite abuse designed to break their spirits and faith, the hostages refused to denounce the United States.

Commission 52 spearheaded the Congressional Gold Medal initiative honoring the hostages for their bravery, sacrifice and outstanding service to the United States. The bill initiative was passed in the Senate and is now being voted on by Congress this week.

“After 40 years of waiting, the 52 deserved to be remembered as the heroes they were and it’s an honor to be a part of it,” said Brock Pierce. “The sacrifice they made is worth our utmost respect and everyone can agree on that.”

In addition to the survivors and family members of the former American hostages, the following members of Congress were also in attendance for the ceremony:

“The bravery and sacrifice made by U.S. Embassy workers who were held against their will must be honored,” said U.S. Representative Tom Suozzi, who attended the celebration. “We can never forget their sacrifice and their never-ending will to uphold the values our country holds so dear.”

Brock Pierce is a blockchain pioneer, technology investor and philanthropist with an extensive track record of founding, advising, and investing in disruptive businesses. He’s been credited with pioneering the market for digital currency and has raised more than $5B for companies he has founded. Pierce is the Chairman of the Bitcoin Foundation and co-founder of EOS Alliance, Block.one, Blockchain Capital, Tether, Mastercoin (first ICO), and Lighthouse NFT, the first ground-up physical NFT smart gallery. In 2020, Pierce ran for President of the United States as an Independent, receiving the first-ever US presidential vote cast on the blockchain. Pierce is currently chairman of Percival, his business office which invests in public and private opportunities with a focus on early-stage investments in deep tech.

He is an active supporter of the American Civil Liberties Union (ACLU), the Foundation for Individual Rights in Education, the Center for Individual Rights, and the Brennan Center for Human Rights. Pierce is Chairman of the Integro Foundation, a Puerto Rico-based non-profit focused on helping Puerto Ricans and supporting environmental and humanitarian efforts throughout the Caribbean region. Pierce is also Vice Chair of the U.S. Marines Toys for Tots Foundation of New York, Long Island and Puerto Rico.